TOUCHING IS A VERB: THE HANDS OF THE PANDEMIC AND THE INESCAPABLE QUESTIONS

An essay I originally wrote in Spanish for Revista de la Universidad: Del verbo tocar.  Here translated into English by Sarah Booker and published by 3am Magazine (Whatever it is, we area against it): Touching is a Verb. 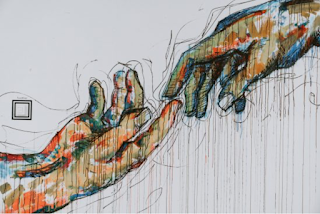 Touching Is a Verb
As the virus is spread through proximity, especially through the respiratory system and touch, we have to be aware that we are bodies. It seems like a simple operation. It isn’t. The machine of the production of goods has accustomed us to living under the illusion that we are incorporeal. We can work endlessly. We can consume endlessly. If we were in a story by the Salvadoran writer Claudia Hernández, we would be those characters that, even when dead, even when already turned into cadavers, continue swiping our entry card to get into work or pulling out our credit card at cash registers. Capitalism in the US style is like this: literally disembodied.
The illusion of not having a body, which pills and various medications contribute to, leads to the illusion of having no other connection to the world besides the electronic connection. From the spell of abstraction hangs the absence of solidarity with our surroundings and, at the end of it all, indolence. That which does not touch us—that which we do not know touches us—does not hurt us. But now that we are stopped, now that we know that our hands are lethal weapons and not just, as Kant wanted, what differentiates us from animals, we cannot not think about it. The re-materialization of our worlds in times of deceleration forces questions that are political at their very root: who has touched this object that I am touching? Which is another way of asking: where does it come from, who produces it, in what conditions of exploitation or sanitation is this that comes into my hands created, with what quantity of virus? It took the anthropologist Anna Lowenhaupt Tsing years and many pages to answer those questions in relation to the matsutake, the mushroom revered in Japan that grows in wooded zones that have survived processes of devastation. Indeed, there are a ton of hands in The Mushroom at the End of the World: On the Possibility of Life in Capitalist Ruins: those of the migrant workers, those of the businessmen, those of the forest rangers, those of the police, those of the immigration agents. Calloused hands and soft hands. Hands accustomed to caresses or hands that have never felt moisturizing lotion. Tracing the labor of hands in the processes of production and reproduction in the world we live in is an imminently political task. And, right now, it’s an inescapable task. Our lives depend, in fact, on asking those questions and paying full attention to the answers. Everything we have close by—and right now we know that we are always, that we always have been, close to so many hands—affects us because it concerns us. This could well open the door to the end of indolence.